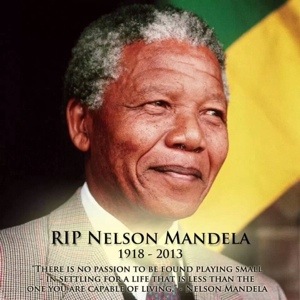 Mr Mandela, 95, led South Africa’s transition from white-minority rule in the 1990s, after 27 years in prison.

He had been receiving intense home-based medical care for a lung infection after three months in hospital.

In a statement on South African national TV, Mr Zuma said Mr Mandela had “departed” and was at peace.

“Our nation has lost its greatest son,” Mr Zuma said.

The Nobel Peace Prize laureate was one of the world’s most revered statesmen after preaching reconciliation despite being imprisoned for 27 years.

He had rarely been seen in public since officially retiring in 2004.

“What made Nelson Mandela great was precisely what made him human. We saw in him what we seek in ourselves,” Mr Zuma said.

“Fellow South Africans, Nelson Mandela brought us together and it is together that we will bid him farewell.”

Earlier, the BBC’s Mike Wooldridge, outside Mr Mandela’s home in the Johannesburg suburb of Houghton, said there appeared to have been an unusually large family gathering.

Among those attending was family elder Bantu Holomisa,

A number of government vehicles were there during the evening as well, our correspondent says.

Since he was released from hospital, the South African presidency repeatedly described Mr Mandela’s condition as critical but stable.

He was awarded the Nobel Peace Prize in 1993 and was elected South Africa’s first black president in 1994. He stepped down after five years in office.

Colonel Gaddafi has been killed in his home town city of Sirte.

Gaddafi is said to have died of gunshot wounds that he sustained during his capture.

A video was released of a dead body covered in blood – and an NTC official said he could confirm the man in the footage was gaddafi.

Certain reports said that he had been shot in the legs, the side of his torso and his head.

The former dictator had supposedly been found unconscious in a culvert under a house in Sirte and died on the way to hospital.

Graffiti was painted over the water channel saying “this is the place where the rat Gaddafi was hiding. Contemptible Gaddafi”

Gaddafi’s bloody body was loaded on top of a vehicle and taken to Misrata, a city that was besieged for months by his forces.

A large crowd surrounding the vehicle chanted ” The blood of the martyrs will not go in vain. ”

A mouse in my house

The family of singer Amy Winehouse say they have been left “bereft” by her death at the age of 27.

Celebrities and fans have lined up to pay tribute to the singer after she was found dead at her home in Camden, north London on Saturday.

The family’s statement said: “Our family has been left bereft by the loss of Amy, a wonderful daughter, sister, niece. She leaves a gaping hole in our lives. We are coming together to remember her and we would appreciate some privacy and space at this terrible time.”

Winehouse battled drink and drug problems throughout her career and news of her death was quickly followed by suggestions that it could be related to one or the other.

But Superintendent Raj Kohli has warned it is “inappropriate” to speculate at this stage on the cause of death, which is being treated as “unexplained”. A post-mortem is likely to take place on Monday.

One of Winehouse’s security team had found her and called an ambulance.

The singer’s grief-stricken mother Janis told the Sunday Mirror she had seen her daughter the day before she was found dead. She said: “She seemed out of it. But her passing so suddenly still hasn’t hit me.”

The performer had said “I love you” at the end of a day out together, and her mother said she would always treasure those words.

Father Mitch, who flew back from New York when he heard the news, said: “This isn’t real. I’m completely devastated.”

Celebrities including Russell Brand, Rolling Stone Ronnie Wood and producer Mark Ronson have all paid tribute to the multi-award winning performer, with Brand, a former addict, calling her “a genius” and saying addiction should be treated like a potentially fatal illness.

Amy Winehouse, 27, was discovered at her apartment in north London by emergency services at around 3.54pm this afternoon, according to sources.

“On arrival officers found the body of a 27-year-old female who was pronounced dead at the scene.

“Enquiries continue into the circumstances of the death. At this early stage it is being treated as unexplained.”

Amy had recently cancelled all tour dates and engagements after a series of erratic public appearances.

But she appeared with her goddaughter Dionne Bromfield earlier this week at the iTunes festival where she urged the crowd to buy the young singer’s album.

Amy had battled drink and drugs problems throughout her career.

She has had a troubled life which has included various stints in rehab for drug and alcohol addiction.

In an interview in 2008, her mother Janis said she would be unsurprised if her daughter died before her time.

She said: ‘I’ve known for a long time that my daughter has problems. But seeing it on screen rammed it home. I realise my daughter could be dead within the year. We’re watching her kill herself, slowly.

‘I’ve already come to terms with her dead. I’ve steeled myself to ask her what ground she wants to be buried in, which cemetery. Because the drugs will get her if she stays on this road.

‘I look at Heath Ledger and Britney. She’s on their path. It’s like watching a car crash – this person throwing all these gifts away.’

Amy Whinehouse is now on the list of famous people who have died at the age of 27, know as the 27 club.

Details are emerging of how al-Qaeda leader Osama Bin Laden was found and killed at a fortified compound on the outskirts of Abbottabad in north-west Pakistan.

Dead after a decades of hiding.

The compound is just “a stone’s throw” and less than 200 yards from the Pakistan Military Academy, an elite military training centre, which is Pakistan’s equivalent to Britain’s Sandhurst, one local journalist from Abbottabad told the BBC.

Other reports have put the distance at 800 yards.

But the compound lies well within Abbottabad’s military cantonment – it is likely the area would have had a constant and significant military presence and checkpoints.

The operation began at about 2230 (1730 GMT) and lasted about 45 minutes, military sources told BBC Urdu. Two or three helicopters were seen flying low over the area. Witnesses say it caused panic among local residents.

Barbed wire and camerasThe target of the operation was the compound, which had at its centre a large three-storey building.

When the helicopters landed outside, men emerged from the aircraft and spoke to locals in Pashto, witnesses told BBC Urdu.

People living in the area, known as Thanda Choha, were told to switch off their lights and not to leave their homes.

Shortly afterwards residents said they heard shots being fired and the sound of heavy firearms.

At some point in the operation one of the helicopters crashed, either from technical failure or having been hit by gunfire from the ground.

The compound was about 3,000 sq yards in size but people from the area told the BBC that it was surrounded by 14ft-high walls, so not much could be seen of what was happening inside.

The walls were topped by barbed wire and contained cameras.

There were two security gates at the house and no phone or internet lines running into the compound, the Associated Press (AP) reports.

After the operation witnesses said all they could see was flames snaking up from inside the house.

The forces conducting the operation later emerged from the compound, possibly with somebody who had been inside, local residents told the BBC.

They said that women and children were also living in the compound.

According to one local journalist, the house was known in the area as Waziristani Haveli – or Waziristan Mansion.

The journalist said it was owned by people from Waziristan, the mountainous and inhospitable semi-autonomous tribal area close to the Afghan border, which until now most observers believed to be the hiding place for bin Laden.

This house was in a residential district of Abbottabad’s suburbs called Bilal Town and known to be home to a number of retired military officers from the area.

Intelligence officials in the US are quoted by AP as saying that the house was custom-built to harbour a major “terrorist” figure.

It says CIA experts analysed whether it could be anyone else but they decided it was almost certainly Bin Laden.

Pakistani military took over the area after the raid

Pakistani troops arrived at the scene after the attack and took over the area.

BBC correspondents say US troops were probably operating out of a base used by US Marines in Tarbela Ghazi, an area close to Abbottabad.