Wearing a dress designed by Sarah Burton for Alexander McQueen's fashion house, Kate Middleton arrives for her royal wedding to Prince William of Wales at Westminster Abbey on April 29, 2011 in London.

Kate Middleton, with her father, Michael Middleton, waves as she arrives for her royal wedding.

Miss Middleton wished for her dress to combine tradition and modernity with the artistic vision that characterizes Alexander McQueen's work. Miss Middleton worked closely with Sarah Burton in formulating the design of her dress," the palace said in a statement regarding Kate Middleton's wedding dress.

As she walks into Westminister Abbey with her father, she looks back to wave at her adoring fans and public.

Kate Middleton's dress is made from ivory and white satin gazar, and the bodice and skirt feature hand-cut English lace and French Chantilly lace. The train measures almost nine feet long. Here she arrives for her royal wedding to Prince William of Wales at Westminster Abbey on April 29, 2011 in London.

Her sister stole half the show in the same colour as maid of honour.

Kate Middleton's veil is made of layers of soft ivory silk tulle with a trim of hand-embroidered flowers. It is held in place by a Cartier "halo" tiara, lent to Middleton by Queen Elizabeth II. The tiara was presented to Princess Elizabeth (now the Queen) by her mother on her 18th birthday.

The lace applique for the bodice and skirt was hand-made by the Royal School of Needlework. Individual flowers were hand-cut from lace and hand-engineered onto ivory silk tulle to create the dress' unique design, which incorporates the rose, thistle, daffodil and shamrock.

The bride's earrings, diamond-set stylized oak leaves with a pear-shaped diamond set drop and a pave set diamond acorn suspended from the center, are by Robinson Pelham and were inspired by the Middleton family's new coat of arms. The earrings, which were made to match the tiara, were a personal gift to Middleton from her parents for her wedding day.

The embroidery is just stunning.

Kate Middleton arrives with her sister, the Maid of Honour, Philippa Middleton, to Westminster Abbey.

Kate Middleton has her dress adjusted as she arrives with her father Michael at Westminster Abbey before her marriage to Britain's Prince William in central London April 29, 2011.

A woman adjusts the dress of Catherine Middleton as she arrives with her father Michael Middleton.

Catherine Middleton with her Father Michael Middleton and Bridesmaids arrive in Westminster Abbey.

As the three and half minute walk down the aisle begins.

Prince William speaks to his bride, Kate Middleton, as she holds the hand of her father.

Prince William takes the hand of his bride Catherine Middleton, now to be known as Catherine, Duchess of Cambridge, followed by Prince Harry and Pippa Middleton as they walk down the aisle inside Westminster Abbey.

Prince William and Kate Middleton during their wedding service.

The Abbey looking joyous and colourful.

Kate, Duchess of Cambridge, turns back as she leaves the balcony of Buckingham Palace London after after her wedding to Britain's Prince William, on April 29, 2011.

The official photo of the immediate family in Buckingham palace.

Not once! But twice! 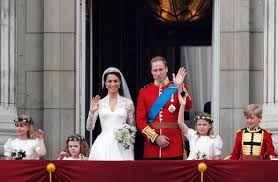 On the balcony they wave to their adoring public.

Bridesmaids all in the same colour.

Our future king and Queen.

Prince William drives his wife away from Buckingham Palace after the wedding reception hosted by the Queen.

Prince Harry was involved in decorating the Aston Martin.

The colours of the nations flag.

….. And as always with every wedding there is always a few disasters along the way!

Princess Beatrice of York and Princess Eugenie of York.

Victoria (getting funeral mixed up with wedding!) and blonde hubby with medal on wrong side of lapel.